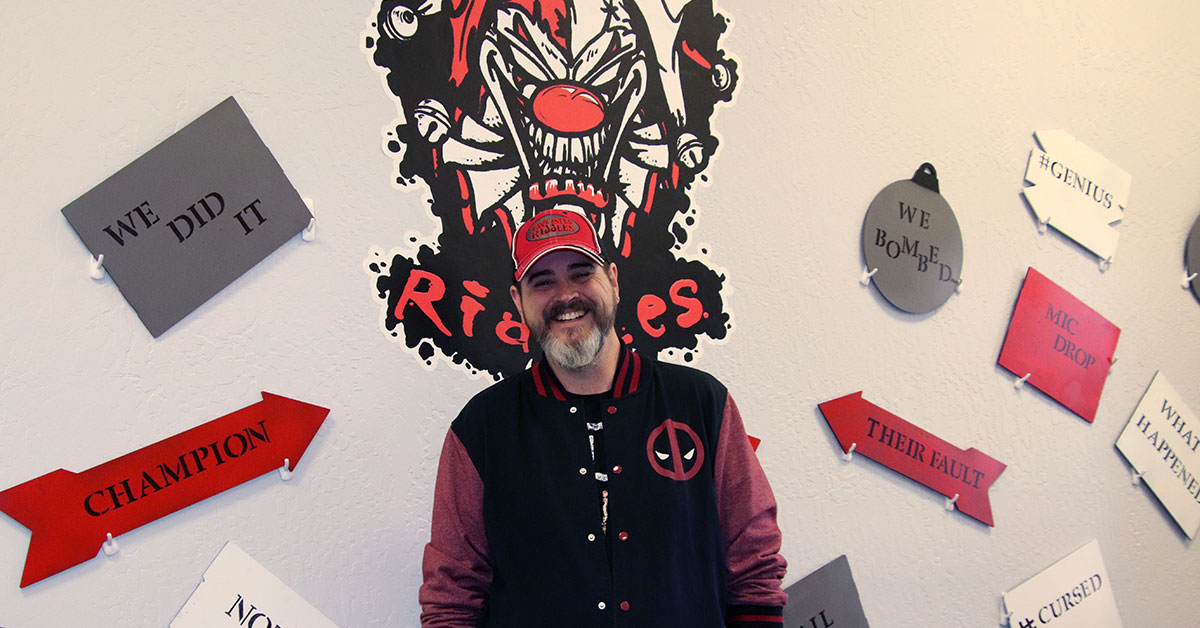 The first of many questions for visitors to Twiisted Riddles, home of Goodyear’s first escape rooms, is right there on the sign: Why are there two i’s in Twiisted? Because, in an escape room, you need to keep both eyes open to find the clues.

An escape room contains a game in which players must work together to discover clues, solve puzzles and complete tasks in order to reach a goal in a limited amount of time. Their creators often use sounds and lighting to create the atmosphere of whatever scenario is playing out.

Escape rooms are great for family-and-friends, organizational team building, and special events. They are a unique way for people to work together, create new bonds, and build relationships.

Owner Jason Bach has run backyard haunted houses around Halloween for a decade. Three years ago, his father was checking out Halloween websites when he came across one that also discussed escape-room franchises.

“We looked into it and, with my background, it just seemed to fit. It was me,” says Bach, a Deer Valley High School graduate who went on to study special-effects makeup in California.

It was such a good fit, in fact, that Bach passed on the franchise model in favor of creating his own, unique business. Sadly, things didn’t go according to plan.

“This was supposed to be me and my two daughters starting it and running it,” Bach says. But his older daughter and grandson were killed in a December 2018 auto accident. “She was going to do the marketing. She was 31, and my grandson was 5.”

Bach says their memories are the forces driving him to make sure Twiisted Riddles is a success. His new office contains his grandson’s name, Logan, spelled out in Star Wars lettering that had been on the boy’s bedroom wall. He says his daughter’s former employer, Maine-based promotional products distributor Geiger, kept in touch with the family and contributed some promotional work to the new business.

Bach’s younger daughter is a part owner of Twiisted Riddles, which employs six people – five of them family members.

The Clock Is Running

Twiisted Riddles opened Feb. 8 at 633 S. Estrella Parkway, Suite #120 in the Shops at Serafina – across from the new Goodyear Recreation Campus. It costs $25 per person, with a maximum of eight, to book an escape room for an hour. Two of the three rooms are up and running.

“We’ll keep track of how many people go through each room” he says. “If booking falls off, we’ll flip the room.”

In keeping with Bach’s haunted-house background, Twiisted Riddles has its own creepy mascot, Twiisty the Clown, who ostensibly updates the business’ Facebook page.

“I just wanted to bring my sense of humor into it,” he says. “I had my tattoo artist design him.”

Bach worked in the bowling industry for 21 years, about 15 of them in management. He met his wife while working at Peoria Lanes.

Goodyear is one of Arizona’s fastest growing communities, with a population increasing by 5% in just one year – more than double that of other Greater Phoenix cities. What it didn’t have, according to Bach, was an escape room.

“There are a ton on the east side, but the Southwest Valley was definitely in need of an escape room,” he says, adding that he appreciates the support his business has received from Goodyear’s Economic Development officials.

For more about Twiisted Riddles or to book a room online, visit https://www.twiistedriddles.com.