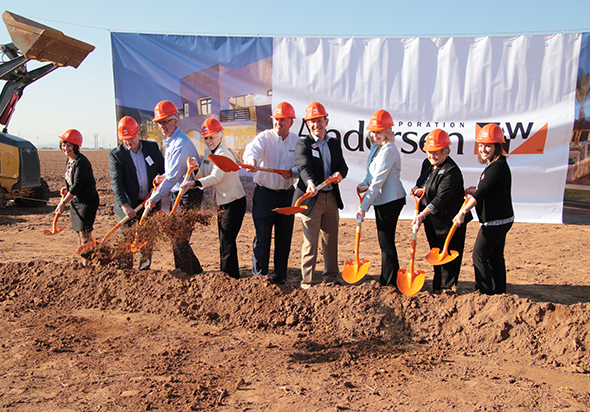 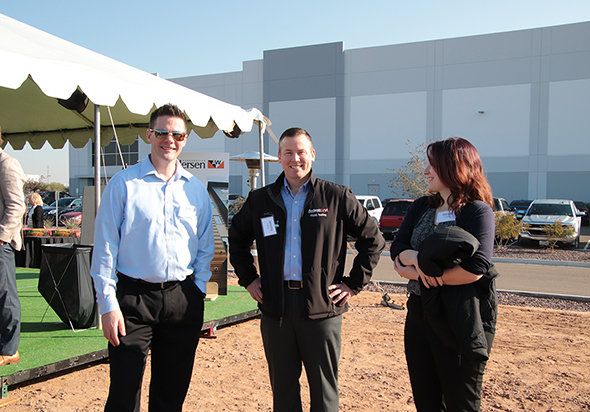 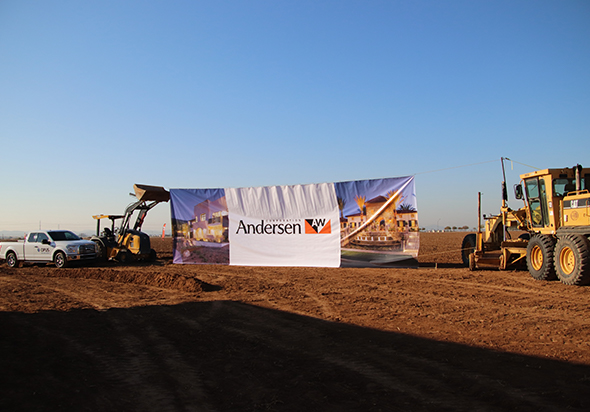 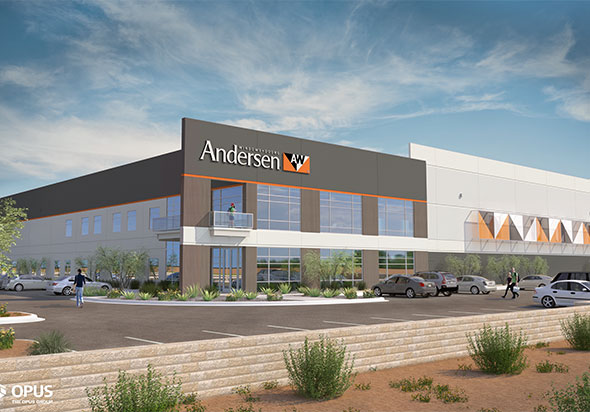 Dirt is moving in Goodyear today as the city welcomes Andersen Corporation, America’s premier window and door manufacturer. The company plans to invest more than $105 million in a 500,000 square foot manufacturing and distribution facility and create more than 415 jobs during the first phase of this expansion. Andersen anticipates a potential total investment of at least $200 million through a future expansion of the campus. The campus is expected to be operational in early 2020.

“We are seeing positive changes in our community, most notably the increase in quality jobs and employment growth. We greatly appreciate Andersen’s commitment to our city and our mission to enhance the community’s prosperity,” said Goodyear Mayor Georgia Lord.

Business, government and community leaders commemorated the occasion with a ceremonial groundbreaking near Cotton Ln. and MC85. Andersen’s Goodyear facility will manufacture Andersen® 100 Series products. This expansion is part of the company’s strategy to increase capacity to support demand and expand its presence in the western United States.

“Our vision is to make the world a better place by living up to the promise that everyone benefits from their association with Andersen – our employees, customers, distribution partners, suppliers, shareholders and the communities in which we live and work, which now includes Goodyear, Arizona,” said Jay Lund. “We are grateful for the many allies who are working alongside us as we embark on this important expansion of our business.”

“Andersen’s selection of Goodyear for its new facility will create hundreds of jobs and significant capital investment in the region,” said Arizona Governor Doug Ducey. “Manufacturing has always been a key driver of job creation and economic prosperity, and this project adds to Arizona’s diverse economic landscape.”

At the groundbreaking ceremony, Andersen announced a $25,000 donation to Habitat for Humanity Central Arizona, helping to create more affordable housing in Maricopa County. The company has a long-standing commitment to corporate citizenship and to making a positive impact in the communities where employees live and work.

About City of Goodyear
Goodyear, Arizona has a diverse blend of amenities with abundant business, cultural, educational and entertainment resources. Today, the city’s population is nearly 85,000 and features a highly educated and skilled workforce, just minutes from the heart of Downtown Phoenix. The low cost of doing business, robust transportation options, fiber connectivity and a lot of southwest charm create the right economic conditions to power any business. Goodyear is one of the most dynamic and rapidly growing regions in the nation and spring training home to MLB’s Cleveland Indians and Cincinnati Reds. Fortune 500 companies, including Amazon, Lockheed Martin, Ball, Dick's Sporting Goods, UPS, and Darden Restaurants have chosen Goodyear as the place to be.

Headquartered in Bayport, Minnesota, Andersen Corporation and its subsidiaries manufacture and market window and door products under the Andersen®, Renewal by Andersen®, EMCO®, Weiland®, MQ™ and Heritage™ brands. Andersen, a privately held company, was founded in 1903 and employs more than 8,000 people with manufacturing sites in North America and Europe. Andersen has earned the U.S. Environmental Protection Agency’s 2018 ENERGY STAR® Partner of the Year – Sustained Excellence Award. Visit us at andersencorporation.com.